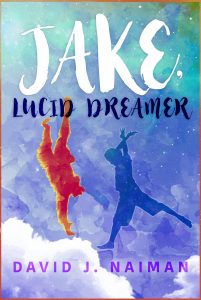 12-year-old Jake has been suppressing his heartbreak over the loss of his mother for the past four years. But his emotions have a way of haunting his dreams and bubbling to the surface when he least expects it. When Jake learns how to take control in his dreams, he becomes a lucid dreamer, and that’s when the battle really heats up.

Using his wits to dodge bullies by day and a nefarious kangaroo hopping ever closer by night, Jake learns about loss, bravery, the power of love, and how you cannot fully heal until you face your greatest fear. This uncompromising novel is a magical yet honest exploration of emotional healing after a devastating loss.

Few experiences are more exciting than your own dreams. Even fewer are more tiresome than listening to someone else’s, but hang with me for a sec. This isn’t what you think.

I wait behind the curtains of a stage next to a bunny who is juggling mice. I’m supposed to go on next, and I have absolutely no idea what I’m going to perform. Whenever I try to think up an idea, the bunny misses her catch and the mouse hits the floor, giving off a dull squeak. You can imagine how distracting this is. Then I realize that I’m practically naked. The only thing between me and total embarrassment is my flimsy underwear.

By now I should have figured out that I’m dreaming – what can be more obvious than the underwear bit? – but I don’t. I’m too nervous about having to go on stage next to worry about what is and isn’t normal. That’s the funny thing about dreams: the ridiculous seems perfectly reasonable until the moment after you wake up.

Then it happens. I’m stressed out about my turn, clueless to the absurdity of bunnies juggling mice or, for that matter, the seagulls crossing swords with the cows or even the chimpanzees twirling in their tutus. My moment comes when the penguin tells me it’s time for me to go on stage. In an absolute panic, I say no.

Just to be clear, I mean that I say no – not the dream version of me shaking in my underwear by the stage but me, the guy in bed thinking up this nonsense for whatever reason we all dream. And when I say no, everything changes.

The dream haze lifts and my vision becomes super clear like when I first got glasses. I move my arms and stare at my hands as though I’m an alien inhabiting a new body. And just to be clear, when I say I move my arms, I mean that I do this – not the dream version of me but the actual, well, you get the idea. My point is that I can control myself in the dream, and this is the coolest thing I have ever done. Ever. True, that’s not saying much since I’m only a seventh grader, but it’s still very cool.

I don’t think the penguin agrees. He backs away and calls out for someone named Connor. A kangaroo hops over, looking none too pleased.

“You’re not allowed to do that, mate,” Connor says. Of course he has an Australian accent. He’s a kangaroo!

Connor crosses his arms. OK, how does he not get how awesome this is? I shake my whole body around, ending with wide arms and a big “Ta-da!”

The kangaroo sighs, jumps high in the air, and slams both feet directly into my face.

I wake up with a start and cuss out the kangaroo. I know quite a few cuss words thanks to middle school. My dad’s not so thrilled, but I figure hey, at least I’ve learned something.

I pull the sheet over my head and mutter, “Connor, Connor, Connor!” to remind my brain where I left off. I’ve never been able to slide back into the same dream, but I try anyway. Unfortunately, if I do dream again, I don’t remember it. The next thing I know, my alarm gives off an irritating buzz, and I slap the thing hard.

Groan. Another stressful day of school with all those annoying people. No wonder I only ever dream about animals.

Available as an eBook and on paperback at Amazon

David J. Naiman writes magical realism for children under his own name and humorous medical fiction for adults under his pen name, David Z Hirsch. He lives in Maryland with his wife and two sons. Visit his Amazon author page and website.

Kimberly is a force of nature and a truly unique talent in a sea of consultants that promise change but never quite achieve it.  I’ve worked with her both for my own company and together with other clients and I’ve experienced first hand how she uses her talents as a brain scientist, entertainer, empathetic listener, and engineer to get ideas to become reality and groups to become teams.  With just 1 visioning session with her 5 years ago, she changed my mindset and put my company onto an entir… END_OF_DOCUMENT_TOKEN_TO_BE_REPLACED

I worked with Kimberly while she was a consultant working with Extreme Networks and I was on the core project team. Extreme wanted to speed up its product development lifecycle and enlisted Kimberly’s help to do so. I found Kimberly to be smart, tough, dynamic and a welcome change agent. She navigated through the executive level politics and was able to deliver results that greatly improved the process controls and adherence with the company – enabling the company to focus on doing the right thi… END_OF_DOCUMENT_TOKEN_TO_BE_REPLACED