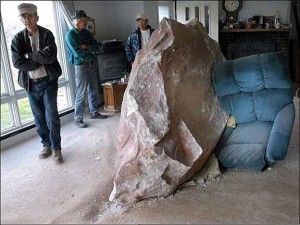 Scrappy Project Management Mindset Series – Part 3 of 4. If you’re going to lead projects to success you’ve gotta have a powerful mindset that supports you. This week I’ll share some mindset medicine that will keep you scrappy. – Kimberly

Don’t think for a minute that just because I’m a possibility thinker, with an obsession for accomplishing seemingly impossible projects, that I’m not also capable of ruthless realism. I am. In fact, I love to go to the dark side! (My friend has a T-shirt that says “Come to the dark side – we have cookies!” Awesome. I want one.) There’s nothing contradictory in being both hopelessly optimistic and despairingly negative in my mind. It just means that I’m equally capable of being extreme in both directions. IMHO, that’s a skill that every project leader should develop.

This mindset was aptly summed up in “The Stockdale Paradox“, which Jim Collins coined in his bestseller “Good to Great“. This paradox states that we must confront the brutal facts of our situation while never doubting that – in the end – we will prevail. (Yay!) There’s no need to be either a “rose colored glasses wearing optimist” or a cynic. The ability to embrace both the light side and the dark side increases our ability to take advantage of the former and deal productively with the latter.

A simple exercise can easily demonstrate the power of seeing both extremes of an issue. Think a topic that you feel strongly about, such as Agile, crashing the critical path, or your direct manager, then play the pro/con game with this topic:

1. For 2-3 minutes – Argue the positive aspects, or the most positive interpretation you can imagine, as though your life depends on it.

2. Switch! For 2-3 minutes – Argue just as vehemently for the negatives, both facts and interpretation. Let the vitriol flow!

3. Switch! Argue again for the positive aspects for 1 minute.

4. Switch again! Argue for the negatives for 1 minute.

5. Switch back to positive for 30 seconds.

6. Switch again to negative for 30 seconds.

If you really throw yourself into this you should feel less tied to your original viewpoint, and have a much richer perspective on the topic. (Oh, and if you can’t manage to argue both sides of the topic . . . well, let’s just say you have very little hope of being able to make good decisions with respect to that topic. It’s a well known psychological fact that people who know the least about an issue have the most strongly held beliefs around that issue. That’s probably not a great place to be coming from when you need to make rational decisions on a critical project.)

Negative thinking? Doom and gloom? Bring it on! It’s just a step in the breakthrough process, and every project manager should be able to practice this masterfully. I heartily embrace negative thinking as a powerful risk analysis tool. Once we clearly confront the brutal facts, and the most negative interpretation of our situation, we are well-prepared to seek ways over, around, through and beyond the multitudinous barriers to our success.

Want to get even scrappier? Check out all 5 “Scrappy Guides“, including August’s Scrappy Women in Business by me and 11 gal pals, Scrappy General Management by Michael Horton, released in October, and Scrappy Business Contingency Planning by Michael Seese, released in November 2010.

Kimberly is a force of nature and a truly unique talent in a sea of consultants that promise change but never quite achieve it.  I’ve worked with her both for my own company and together with other clients and I’ve experienced first hand how she uses her talents as a brain scientist, entertainer, empathetic listener, and engineer to get ideas to become reality and groups to become teams.  With just 1 visioning session with her 5 years ago, she changed my mindset and put my company onto an entir… END_OF_DOCUMENT_TOKEN_TO_BE_REPLACED

I worked with Kimberly while she was a consultant working with Extreme Networks and I was on the core project team. Extreme wanted to speed up its product development lifecycle and enlisted Kimberly’s help to do so. I found Kimberly to be smart, tough, dynamic and a welcome change agent. She navigated through the executive level politics and was able to deliver results that greatly improved the process controls and adherence with the company – enabling the company to focus on doing the right thi… END_OF_DOCUMENT_TOKEN_TO_BE_REPLACED