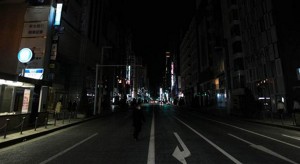 Here’s another article in this series where I squeeze meaning out of seemingly purposeless tragedy.

When I landed in Tokyo 2 weeks ago – my first trip here since the quake – I wondered what signs of the recent disaster might be evident. As the bus made its way from the airport into town I strained to see if there were cracks in buildings or structures in shambles lining the highway. I expected to at least see a missing window or two, if not a pile of rubble here or there, as evidence of the recent 8.9 earthquake. After all, this quake was far more intense than the buildings of Tokyo were designed to endure. (After watching the videos of buildings in Tokyo waving like blades of grass in the wind, I’m of the opinion that their durability in the face of this enormous earthquake is one of the engineering miracles of this century.)

As much as I searched, as far as I could tell everything was exactly the same as the last 100 times I’d ridden this bus route. Except, that is, for the city lights. Tokyo was noticeably darker! For example, convenience stores were plenty bright inside, but their outside lights were completely turned off. The vending machines peppering the sidewalks were glowing dimly from a few LEDs still powered up, but their main lights were also dim, making them mere shadows of the thirst-quenching meccas that normally beckon to parched commuters. And the famous Rainbow Bridge that spans Tokyo Bay, dazzling onlookers by day and night, looked rather humble as a practical number of dim bulbs illuminated only the lower edge. And I can personally attest to the fact that even the toilet seat heaters had been turned off in many establishments.

I soon discovered that this enormous, thriving metropolis of tens of millions of people had managed to reduce their power consumption by 25% since the disaster, something that I imagine many people would have claimed was impossible, or at least unrealistic, prior to the quake. While this single-minded focus on power conservation has been prompted by necessity, I was still impressed that such dramatic reductions were possible without any significant reduction in the quality of life (aside from a chilly behind in the bathroom). It struck me that if 25% reduction was possible without noticeably eroding the quality of life, then far greater reductions should be within reach if human beings were willing to sacrifice a luxury or two. In that spirit I resolved to enormously reduce my power consumption during my visit.

First thing to go was heat and air conditioning in my hotel. Even when temperatures soared to summer-like highs, I just opened the window and let in the fresh air along with the noise of the city. I limited my lighting to just what my computer screen put out, except when I had to tackle the delicate task of putting on mascara – something I hesitate to disclose lest I dispel the illusion that I’m a natural beauty.

Perhaps you think my meager efforts to conserve a few milliwatts of power don’t mean much, but the noticeably darker streets of Tokyo were comforting assurance that I was not alone in my efforts. Knowing that millions of other people were consciously reducing their use of electricity encouraged me to do the same. The goal was simple and clear, and we all could be assured that our efforts were not in vain because the commitment to reduce power usage was strikingly visible everywhere.

That’s often the key to achieving what seems impossible in our projects, too. Clear, simple goals that everyone clearly knows how to support. True, a crisis brings with it a sense of urgency that change is required, but I’m determined to find ways to inspire widespread action without disaster.

I have a tendency to focus on making a big impact, but next time I’m working on a project where we need to achieve seemingly impossible results I’m going to remember that many small contributions can add up to surprisingly big cumulative results.

Working with Kimberly was both a pleasure and honour.  In my decade-plus time in Japan, I’ve never had the chance to work with someone of her talent and caliber. It was motivating and inspirational for me and I got so much out of working with her. I’m now able to use new activities, incorporate a different approach to learning and add value to my classes as well as connect more deeply with my workshop participants.

We had awesome event with you last Friday! I am still amazed from your workSHOCK. It was absolutely above all expectations! I would like to thank you personally and on behalf of all employees for a great time and all the useful insights. I am sure we will meet again soon, since I will promote for another workSHOCK asap! I did a short survey about how everyone understood and experienced it and they all love it. They all confirmed that it is great and useful to have activities that burst our organ… END_OF_DOCUMENT_TOKEN_TO_BE_REPLACED

Nothing is impossible in Kimberly’s world. At a point of career change several years ago, from Silicon Valley CEO to something fun, I participated in Kimberly’s “Create a Vision” workshop. We were friends through a professional organization and I just wanted to see what she did for a living. The result: I was, and still am, amazed and delighted with this brilliant woman and the results she helps others to achieve. Kimberly has a unique ability to infect her listeners with transformative optimism… END_OF_DOCUMENT_TOKEN_TO_BE_REPLACED

Kimberly had worked with the team on several occasions on project management and team dynamics. More importantly she had gained the team’s trust and confidence over the series of workshops. One of the projects did not go smoothly and Kimberly was brought in as the external facilitator in the “lessons learnt” debrief at the end of the project. We needed an external facilitator that the team trusted and could confide in. Kimberly chatted to everyone who was directly involved with the project… END_OF_DOCUMENT_TOKEN_TO_BE_REPLACED

Kimberly is a force of nature: incredibly smart, selflessly generous in her support of clients and colleagues, totally courageous in taking the right action. She lives in complete integrity, practicing what she preaches, being her authentic self. Kimberly is a rare combination of high tech and high touch, combining her background in physics and engineering with a deep understanding of what it takes to be a successful leader. Kimberly has started a movement of transformational change in Japanese … END_OF_DOCUMENT_TOKEN_TO_BE_REPLACED