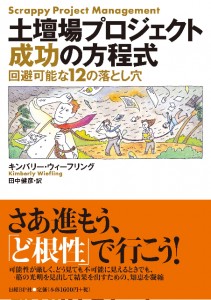 The practical and slightly wacky guide to project management realism was just released in Japanese by the biggest business book publisher in Japan, Nikkei Business Press.  The Japanese version of Scrappy Project Management was translated by an experienced senior executive, Tack Tanaka, who claims that he found it deep, insightful, and . . . well, a heck of a lot of fun!  This translation came as a result of the books popularity in the US, my monthly trips to Japan over the past 4 years working to transform the mindset and results of Japanese business leaders, and . . . well, luck.  In fact, this is yet another example of something that seemed impossible, and then happened nonetheless.  The editor liked the word “Scrappy”.  Ironically there is no literal translation of this word into Japanese, so Tack had a very tough job!

By the way, the future of our world may depend on Japanese business innovation.  While many westerners still imagine Japanese businessmen as traditional, conservative – even old-fashioned – images of deep bows and tedious business card exchanges mask a new reality that’s emerging on the streets of Tokyo, Osaka, and across the country.  A global reality.  Businesses that had focused primarily on the domestic market now reach across the planet in search of growth that just isn’t available within the borders of Japan.  This globalization has created a growing need for leaders with a global mindset.  But where are these leaders getting their inspiration?  You might be surprised to find that the source of this transformation is a partnership between a delicate-looking Japanese woman in her fifties and this wildly enthusiastic golden-haired female consultant from the Silicon Valley (Me.  OK, the hair color is “assisted”).

Yuko Shibata is the first female executive at ALC Education, Inc. Twenty years ago she got into the business of helping the employees of Japanese companies learn English.  Ten years ago she started organizing overseas programs for Japanese executives to study abroad.  And five years ago we partnered up to offer a bold program in Japan that enables many more business people here to access the mind-expanding experiences essential to the development of a global leader.  Bringing teams of senior business consultants from the Silicon Valley, USA, where over half of the residents speak a language other than English at home, ALC’s Global Management Consulting Division has managed to create an intense and effective environment that permanently changes the way participants look at the world.  And my rubber chicken figures heavily into some of the dramatic changes being made.  Unbelievable as it may seem, managers and CEOs alike have embraced this playful symbol of the new global Japanese business leader.

And why are growing international businesses interested?  Because these changes in perspectives translate into changes in behavior and language that lead to improved business results in this increasingly competitive global business environment.  With China, India and Eastern Europe competing more and more effectively for the “better, faster, cheaper” markets over the past couple of decades, Japan has gone looking for business growth through innovation in markets inside and outside of Japan.  But how does a company create a culture of innovation, which requires creativity, boldness, risk-taking and rapidly learning from mistakes, out of a tradition where mistakes are eschewed and even one failure can be fatal?  A lively, highly engaging, interactive approach to adult learning called the Global Leadership and Management Development Programs.  From what I have personally experienced, these programs stretch people far beyond “knowing more”, to taking action and making a real difference – in their businesses, the Japanese economy, and ultimately the world.  And don’t be fooled by the rubber chickens and the playful environment.  The teams we have delivering these programs have their sights set on nothing less than changing the world for the better.

With all of the domestic challenges facing each country these days (financial crisis, environmental decline, pandemic), can even successful developed nations really afford to worry about the whole world?  After all, many of the problems we face as a planet are going to take decades of tenacity and commitment to solve.   But the team at ALC believes that Japan is uniquely positioned to make a contribution to improving the quality of life of the people of our earth, and they’re determined to equip the leaders of Japanese businesses with the tools they need to do just that.  Japanese businesses think long-term.  Their employees are highly educated, hard-working and committed to excellence.  Cooperation and teamwork come naturally to here, and sacrificing for the greater good is legendary.  They are passionate, and have a terrific sense of humor.  And perhaps more than any people on earth, Japanese people feel connected . . . to the environment, to the planet, to each other.

Sure there will be a profit in it for the businesses that provide the solutions to today’s global problems.  But the promise of profit alone won’t be enough to motivate business leaders to tackle the tough problems facing the people of the earth.  It will take determination and the will to achieve what seems impossible, but is merely difficult.  Fortunately Japanese businesses have a long history of achieving seemingly impossible results.  In the 1950s Japanese goods had a reputation for poor quality.  Now Japanese products are revered for the finest quality in the world.  And, as a country, Japan has transformed into the most sophisticated users of cell phones and leaders in robot technology.

This country is only 1/4 the size of California, USA, with a population of around 125 million people and scare natural resources.  But it’s the #2 economy of all countries in the world by GDP.  Once a nation closed to external commerce, many large Japanese companies now earn more than half of their annual revenue from non-domestic sources.  And these companies need leaders capable of venturing far outside of their comfort zones to lead into new and exciting territory, the future.  One of the maps to this territory is contained in  “Scrappy Project Management” . . . who knows where these intrepid explorers will make of this map!  Based on what I’ve experienced working with leaders in Japanese businesses these past 4 years, but I think it’s entirely possible that they’ll become the most entrepreneurial nation on earth . . . the “Silicon Valley” of the World.

Nothing is impossible in Kimberly’s world. At a point of career change several years ago, from Silicon Valley CEO to something fun, I participated in Kimberly’s “Create a Vision” workshop. We were friends through a professional organization and I just wanted to see what she did for a living. The result: I was, and still am, amazed and delighted with this brilliant woman and the results she helps others to achieve. Kimberly has a unique ability to infect her listeners with transformative optimism… END_OF_DOCUMENT_TOKEN_TO_BE_REPLACED

We had awesome event with you last Friday! I am still amazed from your workSHOCK. It was absolutely above all expectations! I would like to thank you personally and on behalf of all employees for a great time and all the useful insights. I am sure we will meet again soon, since I will promote for another workSHOCK asap! I did a short survey about how everyone understood and experienced it and they all love it. They all confirmed that it is great and useful to have activities that burst our organ… END_OF_DOCUMENT_TOKEN_TO_BE_REPLACED

Kimberly is a good communicator and a great source of inspiration to the leader in every person who works with her. She has greatly influenced the leadership qualities in me and has helped me become more effective with my communication skills.

Working with Kimberly was both a pleasure and honour.  In my decade-plus time in Japan, I’ve never had the chance to work with someone of her talent and caliber. It was motivating and inspirational for me and I got so much out of working with her. I’m now able to use new activities, incorporate a different approach to learning and add value to my classes as well as connect more deeply with my workshop participants.