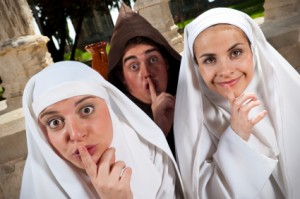 How do the people on your team feel? Mind reading is difficult, and only about 30% of people are in touch with their emotions enough to tell you how they feel even if you ask them. (Don’t believe me. Do the experiment. Most people just stick with the socially acceptable reply “I’m Fine.”) Here are two quick exercises intended to take the emotional pulse of a team and inspire their hopes and dreams for the future. Both can be done in less than an hour with up to 20 people.

Team on a Journey: Break people into groups of 3 – 5 people sitting around a big piece of flip chart paper. Equip each team with a set of markers. Then ask them to imagine that they are, metaphorically, traveling on a journey in some sort of vehicle. Ask them to draw this vehicle and the journey together – each group collaborating on a single picture – SILENTLY.

The keys to success in facilitating this exercise are:
• Silence!
• The drawing is done in silence, without verbal communication.
• Play some unobtrusive music quietly in the background to avoid a deafening silence.
• No planning!
• Don’t let people talk or write their plans before starting to draw. Grunts and gestures are fine, but even this interferes with the free flow of the creative process.
• One drawing per group!
• Although each person may contribute different parts of the picture, each group creates one shared drawing on their piece of paper, not separate drawings for each person.

You’ll usually have to enforce these rules rigorously, as even people who struggle with language barriers have an irresistible desire to talk during this exercise. Prohibited from communicating verbally, some groups try every means possible to negotiate their intentions before putting pen to paper.
Trust the process! While some people strongly object to being forced to be so whimsical and creative, they often see the value in the exercise in hindsight. The real magic happens when you finally manage to get people to abandon their over-intellectualizing and just begin to draw collaboratively. The images that result, and the stories they share in the debrief, frequently reveal deep insights into the unspoken feelings of the team, and are often amusing in a dark sort of way. 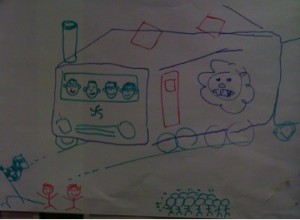 The example above is rather tame compared with many I’ve seen. Some show ships being chased by sharks, airplanes crashing into mountains, skull and crossbones warning of danger, slithering snake pits, volcanoes, tiny rafts boasting the company flag sailing alongside of enormous battleships of competitors, and the inevitable “Bridge Out Ahead” sign.

After the drawings are completed have each group stand around their picture and tell the story. It’s critical that each group present their drawing without any preparation or discussion, and that each person contribute something to the story-telling.

Team Collage: Not artistic? Obviously neither were the people who drew the previous picture, but if you have people who are highly resistant to drawing you can always use a collage instead.  In this case the instructions are basically the same, except the groups silently create a shared collage. Provide plenty of magazines and glue sticks, and strictly enforce the rules of silence and no planning. 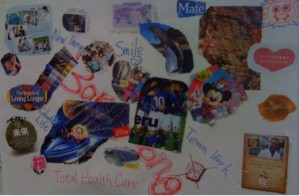 Obsessively analytical types of people will resist these kinds of exercises, but they are often the ones who benefit most from them. The stories that emerge from the groups often reveal deep-seated frustrations, hopes and fears that would never be spoken aloud in a more formal discussion.

Focus on the Future: End on a positive note! After sharing the “dark side”, give people a chance to create their ideal “Team on a Journey” or “Team Collage”, this time with verbal communication and planning. Let each of the groups share their hopes and dreams for the future with each other. This “gap analysis” makes clear the difference between the perceived current situation and the ideal future.

Many teams find it useful to keep these creations hanging in the workplace to remind them of a layer of their relationships that are just as important as the intellectual and business challenges they face. Do these exercises with your team without apology and see what emerges! Even stuffy intellectuals who claim to get no business value from them admit that they had fun. There are worse ways to spend an hour with your team!

“It is always a pleasure to work with Kimberly. As an expert in leadership and an experienced instructor, Kimberly brings her great knowledge and first hand experience in innovation and entrepreneurship to her work. She frequently contributes to the TVLP Institute programs for both individuals and corporate clients from 42+ countries. Kimberly recently guided about 70 senior leaders of YPF, the largest Argentinian oil and gas provider, during a Learning Lab intended to promote team cooperation a… END_OF_DOCUMENT_TOKEN_TO_BE_REPLACED

“I cannot say enough positive things about the Leadership Development courses. Kimberly and her team have the gift of bringing the best out of everyone. The sessions empower you to be genuinely open and to share your flaws, in a fun and approachable manner. Throughout each session, I have continued to do a deeper self-analysis into the person and professional I am, while remaining vulnerable and admitting where I am lacking… which is a huge positive step in the direction of becoming the pers… END_OF_DOCUMENT_TOKEN_TO_BE_REPLACED

Kimberly is dynamic and focused, and an incredible professional in all her activities. She is talented, creative, articulate, and has super people skills. I give her my highest endorsement.

Kimberly helped our organization confront some key challenges we faced working as a team. She also assisted us in creating clear and shared goals, and a practical implementation plan that enabled us to overcome our difficulties in achieving results. Working with Kimberly was energizing, and her experience, practical knowledge and wisdom guided us for years after her workshop. I highly recommend consulting with Kimberly and her Silicon Valley Alliances Team, especially to achieve results in your … END_OF_DOCUMENT_TOKEN_TO_BE_REPLACED

Kimberly’s ‘Leading From Any Chair’ workshop is the single most powerful class I’ve attended, and the highest rated class I’ve participated in. Her teachings have fundamentally changed me as a leader, a coach, and a team member.