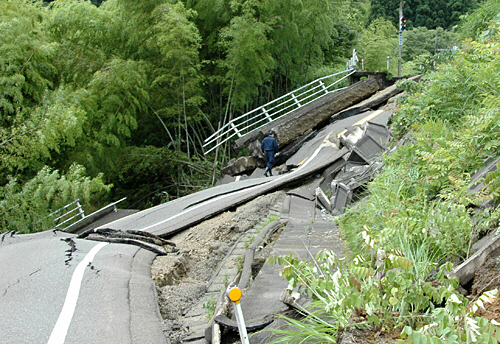 This morning started off just about like any other day – dreams of transforming the planet, concerns about my own inadequacies in that department, and thinking about what I might have for breakfast.  But soon my day took a turn for the more unusual . . .  I had quite a scare this morning as I was soaking in the tub when the 7.4 earthquake began.  There I was, surrounded by water, really enjoying the rocking motion of the . . . tub!  Finally it dawned on me that the waves were kind of big for a bathtub.  Then I noticed that my necklace, hanging from the hook on the door, was swinging rhythmically in tune with the waves.

Funny how the mind works during a crisis – I jumped up, asking myself aloud “What should I do?” repeatedly.  Then I did what every fashion conscious gal would do . . .  washed my hair, brushed my teeth, got dressed and then put on my lipstick.  As I headed  downstairs to have breakfast (and to see if anyone else was as panicked as I am) I decided I had better take the stairs in case the elevators weren’t working.  The door to the stairs were locked!  Now a whole new level of panic began to set in as I realize that the hotel I have been staying in hundreds of times in the past 2 years has locked my emergency escape route, the location of which I had carefully made note of every visit.  There was elevator music playing in the hallway, so I thought, “what the heck!”, I’ll use the elevator.  I inquired about the quake and the locked staircase at the front desk, but they assured me that the stairs automatically unlock during a REAL emergency.  OK, well, I hope I never get to test that assumption!

No one else seemed to notice that there had been a quake, so I settled in to have breakfast with the rest of the guests, glad to be on the ground floor.  There I stayed for the next four hours, just in case that tremor was just a precursor of “the big one”.  When I finally got up the nerve to return to “the pendulum room” as I now call it, I searched the web for news.  It turns out that a man was killed in a freakish accident by being struck by a truck as he ran from his house to escape from the quake.  Perhaps he should have paused to brush his teeth. . .

Keep Kimberly’s ‘Inspired Organizational Cultures’ book within arm’s reach. It is filled with many thought-provoking tips and sage advice intended to make us think about what was, is, and could be in our organizations. This book explores organizational culture from a variety of perspectives, but always with the intention of inspiring positive opportunities for meaningful growth. Focus on any of the 140 nuggets and allow your mind to wander and explore within the context of your personal experien… END_OF_DOCUMENT_TOKEN_TO_BE_REPLACED