Skip to content
Home » Kimberly’s Blog » Which Dog Will You Feed? Choosing Our “Reality” 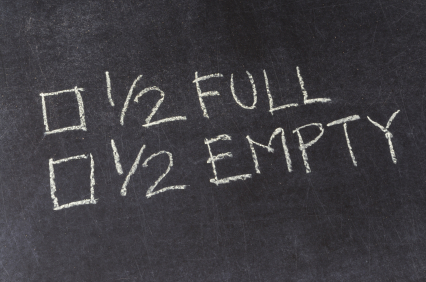 In 1995 I decided to embrace optimism as a strategy for creating possibilities. It wasn’t a rational choice, it was an intuitive leap of faith. My many years of education as a physicist had taught me to ignore my intuition, but logic was insufficient to overcome my exuberance. You see I’d just had my eyes opened by a truly gifted coach who’d helped me discover that the person holding me back my entire life had been myself. Once I recovered from the shock of that revelation I made a decision to use my enormous power to shape reality to create a more hospitable environment, starting with my own attitude.

Immediately I encountered resistance from those who had benefited from my negativity in the past – namely everyone. My being negative was a comfort to others who were convinced of the darkness in the world. It confirmed their own belief system. And, of course, they were loathe to believe that I’d truly changed. After all, I’d been thoroughly convincing as a naysayer, so they rightly assumed that I was just shining them on, and would return to my old patterns of behavior momentarily.

But I didn’t. Instead I changed jobs, took classes, got a coach, practiced tarot card reading, took meditation classes, and joined a mastermind group, and simultaneously embraced numerous paths to enlightenment. Honestly, writing this I think “What a nutcase I must have seemed!” (Remember, I am a physicist by education, and do have an abiding respect for logic and rational thinking.) All of this was one grand experiment to me, the result of which I couldn’t possibly have guessed at the outset – the power to create so-called “reality”.

Nearly 20 years later I find that I’m not so impressed with myself. It turns out that my journey is a familiar one – many more famous and articulate people than me have “discovered” that we have the ability to choose our attitude in any circumstance, and thus shift our perception of that which we call “reality”. Since then I’ve been practicing using optimism as a strategy for creating a better future, and I’m very grateful that I had this epiphany while there was still time for myself and others to benefit from it. I’ve been able to start my own business helping organizations transform into more life-affirming work environments where individuals can contribute their highest and best, and coach many people to have the courage to define, pursue, and achieve their dreams. Along the way there have been many times when I thought “This truly is impossible, and what a crazy waste of time to even pursue it!” – not just about my own ridiculous fantasies, but about those of the people I’ve helped. But I’ve staunchly refused to judge anything “impossible”, preferring to think of outrageous goals as “merely difficult” puzzles that have yet to be solved.

“Optimism is a strategy for making a better future. Because unless you believe that the future can be better, you are unlikely to step up and take responsibility for making it so.”  ― Noam Chomsky

Unfortunately my commitment to optimism has been tested repeatedly in the past several years. Of course there are always incidents that test ones faith in a better future – greedy business people, corrupt government officials, individual acts of hatred.  The primary attack on my optimistic outlook has come from the news media, which is notorious for reporting bad news far out of proportion to good. Why do I bother to watch the news, read the news, follow the news? It’s been proven that people who follow the news are more depressed than those who abstain. Well, for one thing, BBC is the only English channel I can easily get during my frequent business travel to Japan, and sometimes I just can’t resist some native English dialogue, especially with an exotic (to my ears) British accent. But the most insidious threat to my peace of mind has been the conspiracy theorists among my family and friends.

What conspiracy? You name it! Limitless free power would be available to us if only the power companies didn’t purposely squash access to breakthrough inventions. The ultra-rich control most of the wealth in the world, and democratic governments are merely a front for a well-concealed elite determined to profit from us the way farmers profit from raising diary cows. Five families have purposely enslaved the human race through monetary policies implemented through the world’s banks. And, yes, JFK was murdered by his own people, and the 9/11 attacks occurred with the full cooperation of the US government. Stop the world, I want to get off!

Honestly, I don’t know whether any or all of these purported heinous allegations are true. How could I possibly know? Some of the people who hold these beliefs seem very well educated and have an army of evidence to back up their claims. But I do know that living under such a cloud of cynicism and skepticism does nothing but sap my will to make a positive difference in this world. Suppose the worst of it all is true? Then what? I seem to be pretty much powerless to do anything about it besides add my voice to the masses via social media or decrying it all loudly at my local pub. What’s a sensible person determined to make a positive difference on Planet Earth to do?

A story that has given me guidance goes like this: “There are two dogs inside of me – one white and one black. Which one will grow? The one that I feed.”  I’m not stupid. I know that there are terrible people in the world. I realize that terrible things happen, both as a result of human beings and natural disasters. AND . . . I choose to focus my attention and energy on hope, possibility, and what I can do to move courageously in the direction of a better future. I don’t judge the negative people in my life. They’re mostly attempting to avoid the disappointment that inevitably comes with optimism. I just wish they’d stop trying to protect me from disappointment by shattering my own hopes and dreams for the future. Disappointment? I can handle that. What I can’t handle is the feeling that there is no hope – that there is nothing I can do that matters. Even though my logical mind tells me that this is most probably true in the long run, every day I make it a practice to do something that lights a candle in the darkness for at least one person. Sometimes that’s by facilitating a conversation for possibilities with a group of future business leaders, and other times it’s as simple as being friendly and patient when waiting in line at the airport. Whether or not I change the course of history isn’t the point. I change my own reality by daily contributions to making the world a better place.

Daily Practice: Pretend who you are and what you do and say matters in this world. Act accordingly.

There are two dogs inside of each of us. Which dog will you feed? I’m determined to keep the black one on a starvation diet.

Keep Kimberly’s ‘Inspired Organizational Cultures’ book within arm’s reach. It is filled with many thought-provoking tips and sage advice intended to make us think about what was, is, and could be in our organizations. This book explores organizational culture from a variety of perspectives, but always with the intention of inspiring positive opportunities for meaningful growth. Focus on any of the 140 nuggets and allow your mind to wander and explore within the context of your personal experien… END_OF_DOCUMENT_TOKEN_TO_BE_REPLACED