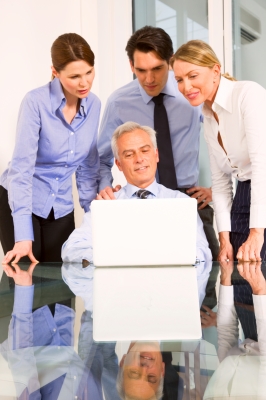 Globalization in today’s business world is rapid and inescapable. As a result, many projects these days involve geographically dispersed teams comprised of members from a wide variety of countries and cultures. While language barriers, decision-making style, and time zones are well-recognized challenges, the positive benefits of global teams continue to drive this trend.

Me, I’m not so excited about some of the consequences of this shift to virtual teams. With the possible exception of sociopaths, I continue to prefer to work with people in the same room. Perhaps it’s because I like socializing. One of the most enjoyable parts of my job is the human interaction. Sitting alone in my office communicating by only electronic means feels . . . well, lonely! Plus there are many nuances of human interaction and teamwork that suffer from separation. In particular, I’ve noticed that “we” quickly turns into “us and them.”

Given that the primary way many people communicate even when they do share an office is email, you might wonder why we’d still need face-to-face meetings. Some of my colleagues seem to thrive on a steady diet of email, texting, phone calls, and video-conferencing. I just want to go on record as admitting that I’m struggling to make the shift. No, I’m not constantly up on Skype, am still just experimenting with Viber and WhatsApp, and only recently learned how to broadcast my own personal hotspot so every mobile device within 50 meters of my hotel room can access the internet wirelessly through my computer’s LAN connection. (I’m not sure how worried I should be about this warning from Apple: “In some cases, sharing your Internet connection disrupts the network . . . and your ISP might terminate your service.”)

Aside from the daily torrent of email and a few Skype coaching sessions, almost all of the consulting work I do is conducted in person. For the past six years I’ve been traveling worldwide on business almost constantly, facilitating intensive leadership programs for culturally diverse teams in globalizing Japanese companies. Typically we’ll all meet in person for a week then work remotely for two months, during which time we make progress on a shared project. Then we meet again for another week, and then have another two-month stint of remote project work. Finally we meet for one last week together to finish the project and present the results to the company executives, frequently including the CEO.

When we’re together in the same room the obstacles to working together are relatively easy to overcome. But in the gaps between in-person sessions, communication can be agonizing. We’ve experimented with various kinds of technology, but no online collaboration tool, video, or lightning-fast internet connection can replace the nuances of a face-to-face interaction. Even huge companies with oodles of money can’t seem to graciously overcome the challenge of distance in human relationships. (One Cisco employee asked me for advice on working with dispersed teams. Aren’t they the inventors of “TelePresence“? Obviously tools alone are not the solution.)

We’ve Got to Stop Meeting This Way!

Let me give you an example of a recent experience working with a team from the UK, US, the Middle East, and Japan. After a flurry of email spanning about a week, we managed to select a time for a webinar when all parties could attend. When the time for our meeting arrived even the organizer wasn’t able to log in via the internet. Of the six people attending the meeting, only two of us managed to participate through the website, which provided video as well as audio — the other four were only able connect via phone.

It was 4:30 AM local time, and I’d just rolled out of bed a few minutes prior, so I decided not to turn on my camera. The language barrier was pretty high for the one other teammate who managed to get onto the webinar. Confused as to why no one else was visible online, he kept asking why he couldn’t see us. His video was working, but his face was so close to his PC camera that I could only see part of him — his left eye and half of his forehead. I finally relented and turned on my camera briefly so he could see that I was really there. One glance at my early morning hairdo was enough to convince him that I really should leave my video off.

Seven minutes into our meeting he finally understood that everyone else was participating only by audio. OK, finally we can start. Does anyone remember why we were meeting? Oh, yeah, the project. I noticed the person with language difficulties wasn’t participating much, so did my best to draw him out during discussions, but most people seemed to have given up on him having any meaningful role in the meeting. Keeping track of what was going on wasn’t easy even in my native language. I can only imagine how mystifying it was for him. At the end of our call I was convinced that if we really want to include people who are not skillful in the common language we’ve got to find a better way to meet.

Another team chose a simple audio conference for a 6:30 AM meeting of team members in the US, UK, Japan, and Thailand. Everyone had a local number to call. Unfortunately the US number I called repeatedly gave me an “all circuits are busy” error. Honestly, 6:30 AM isn’t a time of day that you’ll normally find me awake, but after the 4:30 AM call I figured it would be a breeze. But when the phone number didn’t work I suffered from brain freeze. Here was a meeting that had been on the schedule for weeks, and had taken a half dozen emails to arrange, and I was going to miss it due to a glitch in the phone system! I finally managed to connect by using Skype to call into the Japan local phone number for a mere 3 yen per minute. Out of breath from the stress fest, I announced myself into the audio conference a good 10 minutes late.

These examples were not from some underequipped peons in a company without the financial strength to provide the tools required. Both of these teams consisted of executives in large, prospering companies. If anyone should have access to the best tools available, it should be these people. But I work with people from dozens of companies each year, and from what I hear most employees don’t have routine access to anything better than this.

Is It Mere Coincidence That Collaboration Contains the Word “Labor”?

I find collaborating across Planet Earth difficult. A couple of years ago I wrote an article called “Collaboration is Killing Me”, lamenting the challenges of information sharing in teams. It turns out it was mostly a learning curve issue. There are still glitches, like the occasional accidental deletion where hundreds of files in the synced common folders go missing temporarily. And people still email me to ask me where to find the file they’re looking for on the shared folder instead of searching for it themselves. But information sharing has improved greatly. I’ve come to love Google’s version of wikis, and for the past six months I’ve been experimenting with the aptly named “Jam” from SuccessFactors. These tools are undeniably helpful, but they still can’t give me a hug or ask me out for a beer after a stressful day.

I’m still clinging to an archaic way of doing business — meeting people in person. When not traveling abroad I work out of my home office in Silicon Valley, separated from my teammates by highways so congested they might as well be an ocean. But whenever possible we meet in person, to strengthen our relationship, reduce misunderstandings, and reconnect on a human level.

Of course I’m not giving up on virtual teams. (That wouldn’t be scrappy!) As Dr. Deming once said “No one has to change. Survival is optional.” Somehow I’ll find a way to work effectively and connect meaningfully from a distance. But no teleconference or screen-sharing tool can beat sitting around the same table sipping a beer with teammates after a long day of work. Those conversations are still the most powerful and transformative of any team meetings I’ve ever experienced. Cheers!

I was fortunate to have Kimberly and her team facilitate a very engaging and productive session with my team of Technical Program Managers in Aug 2019. The intent was to energize and motivate the team to feel empowered and make changes to deliver better results. Kimberly spent an afternoon (many felt it was too short) delivering very compelling and thought provoking messages though interactive exercises that kept the group of ~60 people on their feet. Everyone left with a great deal of positi… END_OF_DOCUMENT_TOKEN_TO_BE_REPLACED

Kimberly had worked with the team on several occasions on project management and team dynamics. More importantly she had gained the team’s trust and confidence over the series of workshops. One of the projects did not go smoothly and Kimberly was brought in as the external facilitator in the “lessons learnt” debrief at the end of the project. We needed an external facilitator that the team trusted and could confide in. Kimberly chatted to everyone who was directly involved with the project… END_OF_DOCUMENT_TOKEN_TO_BE_REPLACED